Updates from Interbike 2009. Arrived Wednesday night for CrossVegas which as usual was a great time. I love night time cyclo-cross.

Walked the show on Thursday and Friday.

Some of the items I saw and thought need mentioning here are:

MetriGear Vector pedal spindle based power meters - This was probably the best new product at the show and is talked about all over the internet. I hope after they release the Speedplay version they quickly come up with a new version for Look Keo and Shimano XTR SPD pedals. Their website has most of the details.

Shimano WH-6700 Ultegra Tubeless Clincher Wheels - These wheels make it much easier to get into a tubeless setup right out of the box. We like the NoTubes tape conversions, but this wheel looks like a sure winner at only $649.00 per set retail. They use the same rim extrusion as the Dura-Ace wheelset but it is a ll aluminum rim versus the Dura-Ace which is a Scandium rim. The total weight is a respectable 1652g.

A-Class Alex Rims New R350 700c Clincher Rim - This rim is a new 700C scandium clincher rim that reportedly weighs only 320g. I hope this will be available for testing soon...

Serotta & Nuvinci both had high end sizing cycles/fitting tools on display. The NuVinci model was computer controlled and also offer PowerCranks on it. The best part about both systems was you could measure power while the rider is on the bike, from each pedal, and use that data as part of the fit analysis to help determine the optimum comfort and performance fit. The NuVinci reach and saddle height was adjustable electronically by a lap top, so a fitter could be sitting and watching the rider and the power output and slowly change the fit without the rider stopping. They plan on making this also apply to the saddle fore/aft as well. The Serotta fitting system had easily changeable manual adjustments that were also recorded on a laptop but they also had their technology paired with the Dartfish video analysis software.

Cateye Strada Wireless Adventure Computer - This was a new additon the Catey Strada Wireless lineup and this new cycling computer offers in addition to the normal speed, distance and other standard funtions it has an altimeter, %grade funtion, and a thermometer. This makes it useful for getting even more data about your rides in a small space. Now they just need to add in ANT+ so you can display power when you don't need to record it.... 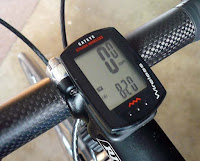 After using the Cateye Strada Wireless RD300W computer I feel it may be the best basic cycling computer currently made. This computer always shows the current speed in very large numbers at the top of the LCD in either MPH or KPH. There are selectable functions on the lower part of the LCD including average speed, max speed, 2 trip distances, a programmable overall odometer, a ride timer with auto start/stop, a clock, a battery saving sleep mode, plus it has a average speed/pace arrow and it also allows for 2 settings for different wheel sizes. The clamp allows tool free and simple attachment to either the stem or to 26.0 or 31.8 handle bars.

I prefer a computer to be attached to the stem and won't purchase one if it doesn't attach that way. This computer offers so many features that make it stand out from the rest of the competition including:
• Very Small Size
• Light Weight - Only 48g
• Of Course it is Wireless
• Mount it to your Stem Or Handle Bar
• Super Large Easy To Read LCD
• Sleep Mode & Auto Start
• Single Button Use - Just Push The Entire Unit

The only cons I see with this computer is the mount - it has a fairly large adjustable button that some people claim sticks out too much - I don't really mind it at all, but feel like it could be the only visual drawback of this computer. I would rate this computer as 5 stars out of 5, which is very high praise.
Posted by Worthington Cycles at 8:58 AM 1 comment: 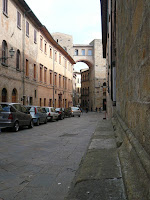 I have completed several hundred miles on a set of the Hutchinson Tubeless Road Tires setup with Stans rim tape and sealant - These tires offer a wonderful alternative to standard road tires with either butyl tubes or even latex tubes. The most interesting aspect of these tires is the sidewall stiffness. Now I am not a heavy rider by anyone's measure, but I was able to ride these tires with as little as 65psi for long road rides with little problems, and I never felt the tire come close to bottoming out or having any excessive deflection. I did notice on very steep climbs and during hill top sprints that at a lower pressure (sub 75psi) I could feel some movement of the tire. I settled on riding with around 75psi as my preferred pressure after starting in the 90's and working my way down.

Wear so far is negligible and I expect that they would last at least a few thousand miles. I have had no flats so far or any holes that I know of that the sealant may have sealed. I have also alarmingly started to get unconcerned with road debris and glass, so now I am worried about what will happen when I am riding with regular tires and tubes - I will probably forget to rub them after going through glass!

I like the comfort of the tires, the confidence that I won't flat in most situations, the cornering feel, and the idea that they have reduced rolling resistance (I can't confirm that).

My only cons on these tires are the weight (290-300g), the fact that they are bit narrow, Shimano's new Dura-Ace wheels have a wider rim to flatten out the profile of these tires, the apparent ease of cuts that destroy the tire (Two other riders I know have had 3 different cut failures during the same period I was testing these tires).

I would rate these tires, with the Stans sealant, at 4.5 stars out of 5.
Posted by Worthington Cycles at 1:34 PM No comments:

Just built up a really nice set of custom built wheels and decided to use the Stan's Notubes sealant with Hutchinson tubeless Fusion 2 700x23c tires. I have to say this setup seems pretty nice. All you need to do is tape the rims with the Stans rim tape, put in a presta valve stem, install the Hutchinson Tires along with an ounce or two of sealant, brush the side walls with some soapy suds and hit it with an air compressor to seat the tires. Everything works as advertised, and on some rims it even works with a floor pump!

This is a great alternative to buying dedicated tubeless wheels, and you can always switch back to normal road tires and tubes at any time. So far the ride is great at even 85psi. Check back for updates on the long term use of the tires & wheels.
Posted by Worthington Cycles at 10:48 AM No comments: